I received an e-mail last week requesting help responding to claims attributed to a wind-industry friendly administration in Ontario claiming that we were, at times, importing electricity. I’ve pulled some figures in response and thought I’d take a couple of minutes to post my comments.

Of course we often have some imports into Ontario – because it’s a market connected to other markets. However, the number of hours Ontario imports more than it exports dropped from market opening (in May 2002) to the recession of 2009/09. 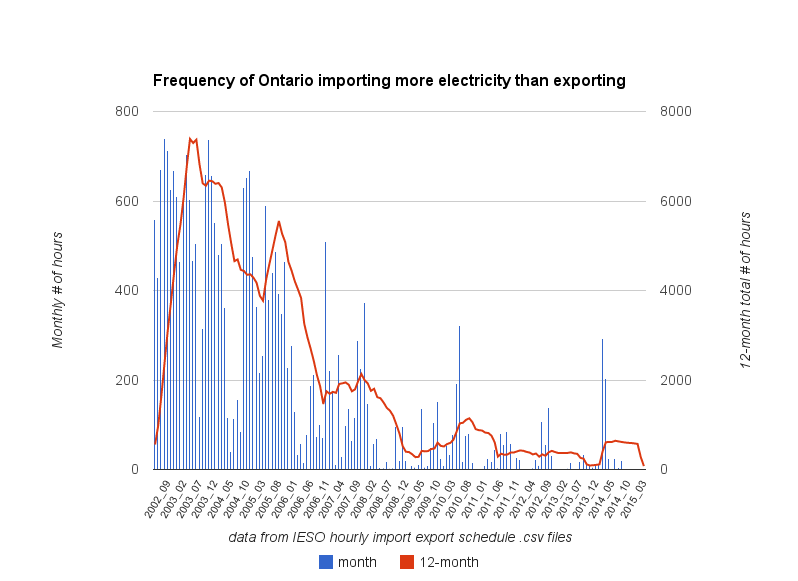 END_OF_DOCUMENT_TOKEN_TO_BE_REPLACED

Ontario’s IESO has released reams of reporting today. My initial take is it communicates an organization is decline.

The least credible claim I’ve picked up on so far is in the new Conservation Progress Report for the 4th quarter of 2014. 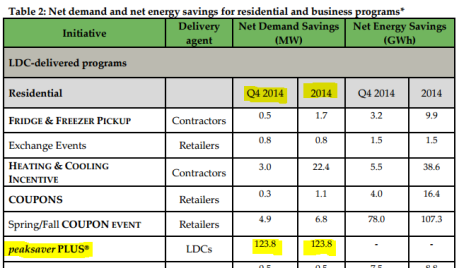 Here’s how peaksaverPLUS is described:

so….. couldn’t possibly be any savings in Q4

END_OF_DOCUMENT_TOKEN_TO_BE_REPLACED

This was first posted on my coldaircurrents site  – which I use for posting found items of interest. This post went beyond pointing out OPG’s 2014 results, with enough of an edge I’m double posting it here.

OPG’s final 2014 results have been released and the net income they are reporting is, if my records are correct, the highest since 1998

Let me tell you about extraordinary items. 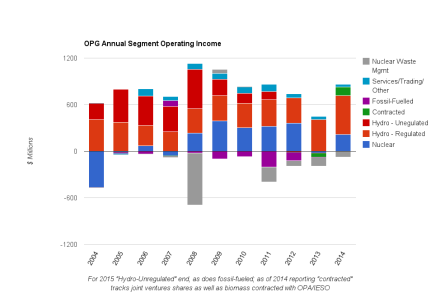 I’ve flipped through OPG’s 2014 MANAGEMENT’S DISCUSSION AND ANALYSIS and spotted some things of interest to me, relevant to many things I’ve written.

There’s news in OPG’s reporting that, I’ll just put out there, maybe I should get a nice cheque for.

END_OF_DOCUMENT_TOKEN_TO_BE_REPLACED

The Globe and Mail reported early March 10th that Premier Wynne’s Ontario government is looking carefully at selling off a portion of Hydro One.

The government has not yet decided exactly how much of the company to sell off beyond the initial IPO proposal, or whether the private sector would ultimately own a majority of the company’s equity, sources said. Much of that would depend on how the initial sale goes.

By the afternoon of the 10th the Globe was adding to the tale:

The Premier said Tuesday that word of the IPO plan “has gotten into the public realm prematurely” and she has not made a “final decision” on whether to pursue it.

“Whatever we do, we are going to control prices. We are going to make sure that the regulatory regimes that will protect people in this province stay in place,”

CTV reported the Premier “said no final decision has yet been made.”

The Premier is shown saying,

If that doesn’t get a “bullshit” from you, you’ve been asleep for years. END_OF_DOCUMENT_TOKEN_TO_BE_REPLACED

I live a little north of the commonly perceived end of Mississauaga’s world (Barrie), but actually still within the orbit of the Toronto area.

The first hint of trouble yesterday was in an e-mail I received at 5:22 pm yesterday originating in Scarborough:

I’m not condoning the sentiment.

Just after 7 the first phone call (south Etobicoke); with the request to see what’s happening with their power situation because not only is their power out, the data wasn’t working with the cell provider either.

Hilarity ensues: nothing on Toronto Hydro outage map for the area, so I entered an outage form – which after entering saw the screen change to a screen telling me if I have a problem to fill out the form below – which did not exist.

I gave the phone number for Toronto Hydro out to my caller, and wished them well. END_OF_DOCUMENT_TOKEN_TO_BE_REPLACED

Good post on what seems to be the bastard of the renewables family: “biomass… is leading the growth of renewable energy in Europe. For whatever reason, this fact is more or less never mentioned.”

“Follow the trendlines, not the headlines”, Bill Clinton once said. He may not – no certainly – does not believe this too much. But as a piece of guidance it is rather wise.

First, there is nothing meriting the term “revolution” going on in EU energy. A simple comparison makes this clear.

I posted a serious (a.k.a. confusing) piece on Cold Air yesterday, Ontario is the sucker of first choice for off-price electricity and today I’ve run the routines on February data.

The Toronto Star advises February was Toronto’s coldest month ever. I didn’t read beyond the title, but I don’t think they meant emotionally. “Ontario Demand” as defined by the IESO, was up about 2% from last year’s also pretty cold February.

And yet, average hourly net exports were higher than ever – although the fewer days didn’t allow the total net exports to reach January’s high.

On Friday the IESO release preliminary Global Adjustment [GA] figures: the first estimate of the dollar total is $474 million, and the second estimate of the class B rate is $40.95. These estimates may or may not be reliable, but the rate will be used to charge some class B ratepayers much less than the $69.81 1st estimate GA charged other ratepayers. Smart is a relative term. Whoever thought of bumping up the billing cyle during this era of virtually nil interest rates my be considered smart with all those revenues coming in a couple of weeks earlier. To me, with interest rates near zero it matters little if they are future receivables or cash in hand. Billing on unexplained estimates doesn’t seem smart, just irresponsible.
“Irresponsible”must be another relative term. END_OF_DOCUMENT_TOKEN_TO_BE_REPLACED