In early 2010, then Minister of Energy Brad Duguid issued a directive to the OPA (Ontario Power Authority) instructing them to create and deliver an “industrial energy efficiency program” specifically for large transmission connected (TX) ratepayers.

That directive led to the creation of the two classes of ratepayers that now exist in Ontario.

It’s an appropriate time to revisit the topic because this past week Ontario’s Minister of Energy was touting the electricity cost-saving opportunities for businesses that qualify for participation in a newly expanded ICI, because those savings come from shifting costs to other consumers.

If you are unfamiliar with the topic the latest article may inspire you to learn more, I recommend some articles for doing so at the end of this short post.

One statement Parker makes is not entirely correct: “IESO did not start disclosing the consumption by ratepayer class until 2015.” While they did not publish the data to their website, they did share it with those who asked. 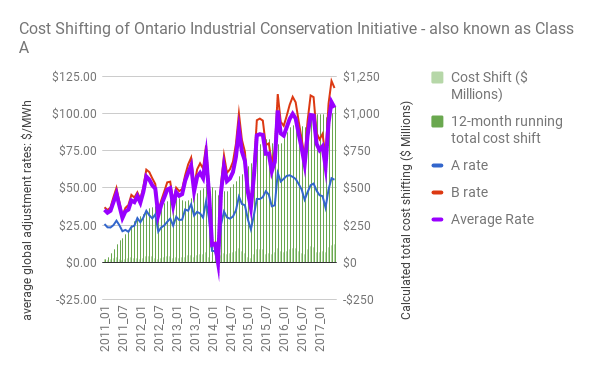 END_OF_DOCUMENT_TOKEN_TO_BE_REPLACED

“Realism never makes for a good copy, as long as there are people who make a living from selling a dream instead”

Perhaps those that remain in the quagmire will speak of this one who got out.
Maybe not.

My Finnish readers will already know that I announced some time ago that I’m done with energy/climate change discussions. I’ve been following the debate actively since about 2007 and have been writing about it since late 2010. I’ve written two books about the topic, one of which is translated to five languages, and blogged fairly regularly. But now it’s time to do something else.

The main reason why I’m refocusing is because I think the debate is going nowhere, and I don’t want to waste my time on a futile project. We are not going to get a decarbonized energy system by 2050. We are going to fail the climate targets, probably by a large margin, and I suspect that a warming of about 3 degrees centigrade is going to be almost inevitable. It’s perfectly possible that self-amplifying feedback mechanisms under way will amplify this change even more. What…

There’s an Ontario Energy Report (OER) that drips out quarterly.

It’s often got a mistake on the first page. Half of that page is static graphics. The other half is some simple data presented in big fonts.

The report could be useful as it contains data that is difficult to find elsewhere. The intent when it started, as I understood it, was to bring data from multiple sources together in a coherent fashion.  I suspect it was supposed to be definitive – to avoid people getting information from rogue sources such as Parker Gallant and I. The official data would be a good thing if it were credible – but the first page often reveals it is not. 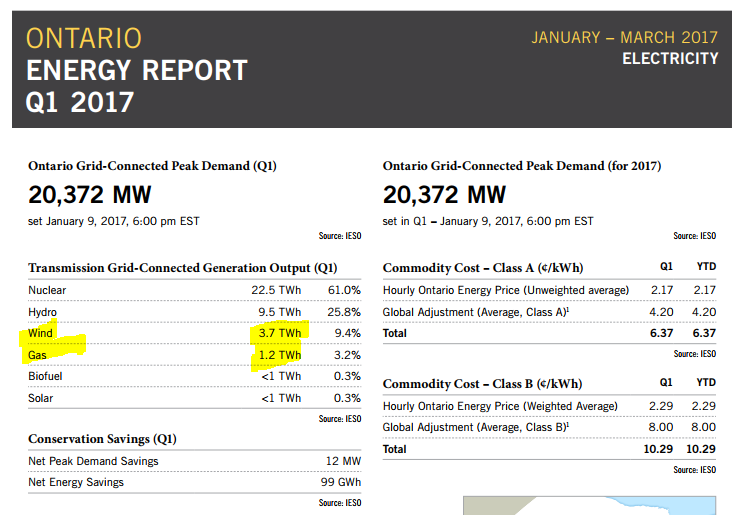 Ontario’s use of gas in generation electricity during the first quarter was very low. It was lower than it’s been in over 50 years. But it wasn’t this low.