The province has a huge issue there getting those [electricity] costs down. That’s an input cost breaking some of our manufacturers.”

Goodyear added manufacturers are telling him electricity is costing ‘thousands and thousands a month more than it did even last year.’

“It’s difficult to be competitive when you have those types of exorbitant rates,” said Goodyear said.

Hydro One chair of the board of directors Sandra Pupatello warned the province faces a difficult decade of challenges in the energy sector combating falling American electricity prices.

The company being attacked is a generator holding a number of nuclear assets, with generation selling, in many cases, in markets at market rates.

Nextera is a label of Florida Power and Light (FPL): FPL operates in regulated environments, where they get a guaranteed return on investments through regulated rates.  Where that is not the case, they generally secure power purchase agreements to avoid exposure to market rates.

Duane Arnold somehow secured a long-term power purchase agreement (PPA) – in the heart of wind country only a year ago.

Seabrook Station has a small PPA to the end of 2034, but may sell into the lucrative New England market

Nextera has little to no exposure to merchant plant nuclear operations near the wind corridor, where the frequent winds have gutted market pricing.

Other companies the article cites in feigning other nuclear operators generally don’t share Exelon’s distain of the PTC include:

If you want to read something substantive on the dangers of gutting market pricing with subsidized variable intermittent supply (driven by the PTC), try this from American Electric Power’s Chairman:

Wind, solar and especially natural gas promoters who care about their fellow Americans should read this testimony http://t.co/nWxDM1Vzgu

Ontario’s Municipal Property Assessment Corporation recently published Impact of Industrial Wind Turbines on Residential Property Assessment in Ontario – 2012 Assessment Base Year Study, and, as is thankfully something of a tradition, Wayne Gulden has analysed/refuted the pro-wind/government study on his Wind Farm Realities site.

The MPAC study contains a graphic indicating the relatively low property values of homes closer to industrial wind turbines, as part of a narrative 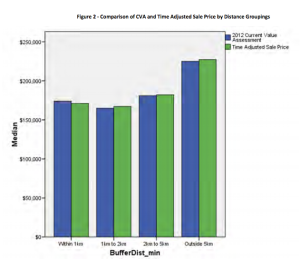 explaining there is no significant evidence that industrial wind turbines (IWT) devalue property.

Those who have followed what may be called a debate on the impact of IWTs on property values are familiar with lower values of properties proximate to IWT’s being explained away.

Relationship between Wind Turbines and Residential Property Values in Massachusetts, a report released early in 2014, also concluded that houses near IWT’s were cheaper … and the report also found no statistical evidence that the turbines impacted pricing.  While living in proximity to an IWT appeared to impact valuations like living near a landfill, prison, highway or transmission line would, the study claims that houses near turbines were cheaper before turbines were planned to be near them:

…our model estimates that home values within a half mile of a future turbine were lower than in the surrounding area even before wind-facility announcement. In other words, wind facilities in Massachusetts are associated with areas with relatively low home value

Not only is this true for the houses looked at in Massachusetts, but the study notes it’s been found to be the case elsewhere too:

Other studies have also uncovered this phenomenon (Hoen et al., 2009; Hinman, 2010; Hoen et al., 2011). If the wind development is not responsible for these lower values, what is?

What indeed.  Wind Farm Realities indicated that the MPAC study doesn’t study the impact of industrial wind turbines on pricing at all, but the variance between what MPAC assessed homes at and what the selling price was.  Only in the case of the homes most proximate to IWTs did the assessed value exceed the sale price, but the difference is deemed statistically insignificant – although presumably not by those selling their homes proximate to IWT’s. END_OF_DOCUMENT_TOKEN_TO_BE_REPLACED

Struggling to move out from under the scandalous actions of the gas plant scandal, and specifically the wiping of Premier’s office computers allegedly directed by former Premier McGuinty’s Chief of Staff – former TD Bank executive David Livingstone – the Wynne government is acting decisively in appointing a much more prominent TD executive to study something or other.

Government Appoints Council to Review Hydro One, OPG and the LCBO

April 11, 2014 12:35 p.m.
Ministry of Finance
The Ontario government has appointed a council to recommend ways to improve the efficiency and optimize the full value of Hydro One, Ontario Power Generation (OPG), and the Liquor Control Board of Ontario (LCBO). The Premier’s Advisory Council on Government Assets will examine how to get the most out of key government assets to generate better returns and revenues for Ontarians.
Ed Clark, Group President and CEO of TD Bank Group, will chair the council. As part of its review, the council will consider various options to generate better returns and revenues to maximize the value of these government business enterprises to the province, including such measures as efficient governance, growth strategies, corporate reorganization, mergers, acquisitions, and public-private partnerships. The council will give preference to owning rather than selling core assets.

The government is committed…

Maybe it oughta be committed…
END_OF_DOCUMENT_TOKEN_TO_BE_REPLACED

I’m usuall compelled by Ross McKitick’s work – but on this one I’m struck by the decay in academic standards demonstrated by the other Professors willing to make the 90 Mt claim.
How many years have diploma factories extended educations through to PhD level grading people on what they think, and not if … let alone how well they think if they do.
These people should be thankful there are Ross McKitricks about to keep academia reputable.

First time I heard the goal has to be energy that is cheap, clean and abundant it sounded bizarre.
Now it seems bizarre so few smart people have arrived at the conclusion.

One of the clues indicating the stupidity and false goals of Ontario’s Green Energy Act was that the price offer for wind and solar were escalated from the previous procurement program. Expensive and getting more so isn’t part of a solution lowering the planet’s emissions.
It’s refreshing Severin Borenstein has written this, but … what should be done with those that say people pay too little for energy, and higher pricing is requisite to teach people the folly of consumption?