The IESO posted a lot of material this week: on feed-in-tariffs, 18-month outlooks, the status of procurement. stakeholder engagement agendas, etc. It’s worth a quick post on some things I noted.

It remains wrong as I write this, and I think that’s a statement about the IESO. The average Class B commodity rate in the second quarter of 2015 was 26% higher than 2014’s, and that was consistent across the 3 months each of which had a Class B consumer commodity rate of around 11 cents/kWh; if the IESO management was interested in the end consumer they’d have know that, and the rate, and would have been as capable as I at noting their error.

I’ll return to the top management later, but first…

On Friday we got an indication somebody in the organization may be more interested in consumers than the boss is. END_OF_DOCUMENT_TOKEN_TO_BE_REPLACED

Bill Gate’s long and tireless efforts to close a deal with China National Nuclear Corp. have finally paid off.  The company has inked a deal to build a first-of-a-kind unit of their sodium cooled fast reactor in China and then manufacture a commercial version of it.Zhimin Qian, President of China National Nuclear Corp. signed the deal with Lee McIntire, CEO of TerraPower at a U.S. Trade and Investment Cooperation Conference held in Seattle on September 22.

END_OF_DOCUMENT_TOKEN_TO_BE_REPLACED

Today the Office of the Auditor General of Ontario is reportedly releasing a “critical report on home-care & [Community Care Access Centres] ” according to an actual reporter,who questioned the motives of the Premier going back to the beer well today:

Consumers, craft brewers, grocers and owners of small bars and restaurants will finally quench their thirst for change under a new deal between Queen’s Park and the Beer Store, the Star has learned.

END_OF_DOCUMENT_TOKEN_TO_BE_REPLACED

Not to focus on the negative, but I was surprised people would be asked if revenues from pricing carbon should be used to subsidize consumption of carbon.

1/3rd of people seemed to think that was exactly what should happen (although separating “gas bills” from “electricity bills” may have added back some sanity): 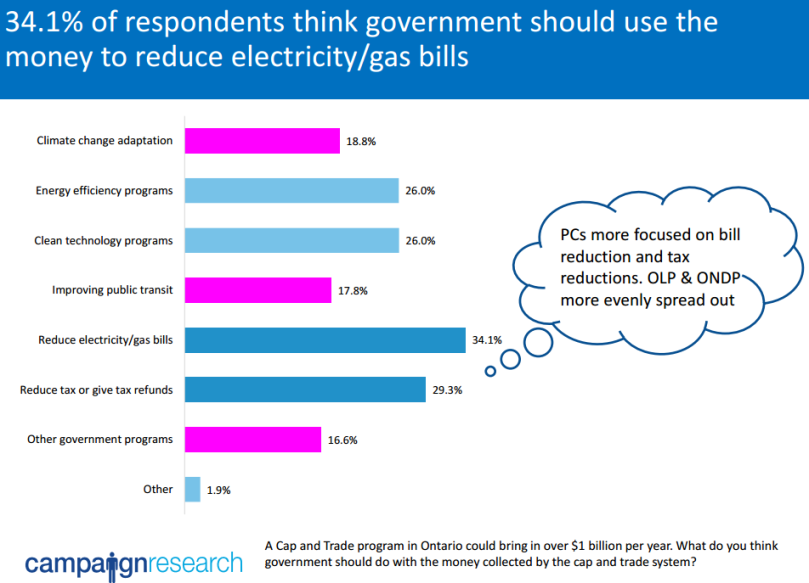 END_OF_DOCUMENT_TOKEN_TO_BE_REPLACED

Not sure how anybody reads something like one J.C.’s latest and doesn’t welcome a “skeptic” label.

“You have signed the death warrant for science.”

An article from Vermont questioning the unexamined growth of industrial wind comes as nature lovers organize for a rally in Prince Edward County.

WE MUST PROTECT OUR RIDGELINES, LAKES AND STREAMS

…at some point the rush into large scale (and subsidized) renewable energy becomes too costly, and too destructive of human and environmental values, to merit continued support. We have reached that point with Big Wind, and it’s time to slow this rush to “renewable energy of all kinds at whatever cost.”

I ask our legislators to support a moratorium on new wind projects until they can answer how well our existing projects have lived up to their developers’ promises, how have they impacted the environment, and how they have affected their neighbors and communities.

Ontario’s legislature is likely immune to intelligent exchanges. The majority Liberal government responded to courts supporting defence of the environment at Ostrander Point by pushing through approvals for massive industrial wind turbines at two other environmentally sensitive locations.

Resistance continues, from many parties. END_OF_DOCUMENT_TOKEN_TO_BE_REPLACED

The Independent (Petrolia and Lambton) this week printed, on its front page,a report on workers concerns about constructing what is now called the Green Electron Power Plant. Skilled trades have not been on the site in recent weeks; a site “the Ministry of Labour has issued nearly 200 work orders …for safety violations.”

[union leader] Cataford says the Ministry of Labour should stay at the Oil Springs Line site to make sure everything runs smoothly.

“I think they should be here every day,” he says adding, “they (the owners) need direction obviously. If you give them direction and leave, they just head it in the other direction.”

END_OF_DOCUMENT_TOKEN_TO_BE_REPLACED

Steph Crosier writing in the Kingston Whig-Standard on the astonishing approval of enormous industrial wind turbines planned for Amherst Island.

Stephen Hazell, director of conservation for Nature Canada, called the approve another ‘tough on nature’ move by the ministry and asks the Environmental Review Tribunal to overturn the approval.

“Given the clear breaches of the federal Migratory Birds Convention Act, the federal government should in future apply its environmental assessment process to wind energy projects,” Hazell said in a release.

“Amherst has the largest breeding population of the at-risk short-eared owl in southern Ontario,” Wise said. “During the winter, Amherst supports the largest concentration of owl species of anywhere in eastern North America as far as we know. “We are all for green energy, but not at the expense of nature.”

Kurt Hennige, president of the Kingston Field Naturalists (KFN), said his group opposes the Amherst Island Wind Energy Project because they know the turbines on Wolfe Island are killing area birds such as ospreys, red-tailed hawks, purple martins and the wilson snipe.

“The KFN believe that there will be the same or higher levels of mortality on Amherst that will result in the local extinction of these four species and have irreversible impacts on Eastern Meadowlarks and Bobolinks,”