It’s one of those statements that looks intelligent if it comes from somebody who is presentable as being intelligent.

The “Provincial Gas Tax” is shown as 14.3 cents per litre in both pies, and there is no indication in the tweet, pies, or reality, that the carbon content of a litre of gasoline has changed. Burda’s description of that as a “REVERSE CARBON TAX” is dumber than her understanding of when a capital letter is appropriate.

This is why I am hesitant on a carbon taxation; the most vocal proponents don’t speak intelligently on the topic, and they aren’t looking for a tool that will allow markets to find carbon mitigation measures – they are usually looking for a revenue tool to carry on their pet idiocy.

I don’t see any substantial changes since I wrote A tool to heal, a tool to steal

This is an excellent opportunity to learn about an environment Toronto’s government intends to neglect.

Prince Edward County (July 30, 2014) – The Prince Edward County Field Naturalists are hosting the county’s first ever BioBlitz at Ostrander Point. The event runs over a 24 hour period from noon on Saturday August 9 to noon on Sunday August 10, 2014 and includes guided tours for the public focussing on how to identify a variety of species from plants to birds, insects and amphibians and reptiles.

Ostrander Point is located within the South Shore Important Bird Area, a site recognized globally for its importance to birds and biodiversity.

“Much of the biodiversity of the South Shore Important Bird Area has not been identified” notes Myrna Wood of the Prince Edward County Field Naturalists Club. Wood continues “Ostrander Point was the subject of an Environmental Review Tribunal hearing during which…

I posted this to coldairings.luftonline.net yesterday – which is hid (to me) by gremlins this morning – so I am repeating the post here.

A couple of weeks ago I wrote on why the IESO’s reporting of “Ontario demand” isn’t reflective of actual demand in Ontario. Embedded generation is lowering the demands on generators feeding directly into the IESO’s grid – and because much of it is solar, the IESO is reporting lower demand during sunnier hours.

Omitting embedded solar generation has changed the demand profile indicated by the IESO’s reporting. Today is a good example of what’s happening and how it can impact the hours chosen to determine global adjustment shares for Class A customers, which are implemented to allocate significant charges for an entire 12-month billing period.

“Load” is estimated here to estimate line loss and legacy embedded sources – and it still peaks in hour 16 or 17, as it always has.

I posted this to coldair.luftonline.net yesterday – which has some gremlins this morning, so I’m double posting here

When the Ontario Power Authority (OPA) released data projections made in supporting the development of Ontario’s latest Long Term Energy Plan (LTEP) they showed the cost of purchasing generation from solar would grow about $280 million in 2014 (in 2012 dollars), and $443 million in 2015. The OPA anticipated that 45% of the growth in in generation costs from 2013 through 2015 would be due to the costs of purchasing production from solar panels.

I’ve spent some time trying to incorporate hourly estimates of solar input into my tracking of Ontario electricity data. It’s not easy, and it’s dynamic, so I’m writing this post to explain how I’m estimating solar production, why my estimates change, why they are better than anything else most, if not all, will see – and what the estimates show.

For most generation, the Independent Electricity System Operator (IESO)  Hourly Generator Output and Capability Report provides an production,, and the capacities of the generators can be established. The level of data available for these generators is what is desired for solar output.

The first two points are greater concerns with solar as most solar generators are “embedded” in local distribution company (LDC) and/or under 10MW in stated capacity. On the third point, of stated capacity, the IESO’s supply overview page currently shows 1824MW of installed wind generation capacity. That may mean something in terms of internal IESO definitions, but the true installed wind capacity is much more meaningfully provided in the OPA Quarterly Progress Reports on Electricity Supply. According to the OPA, at the end of March 2014 “in service” contracted wind capacity was 2762MW; OPA reporting show the IESO’s claimed 1824MW was exceeded over 30 months ago, by the end of 2011. END_OF_DOCUMENT_TOKEN_TO_BE_REPLACED

I saw that Alberta was setting demand records the past couple of days, so I visited the Alberta Electricity System Operator (AESO) website to see how wind generation contributed to meeting peak demand.

Not surprisingly, it didn’t

I say not surprisingly because I’ve written on this before, in July 2012.

Alberta has some comparatively strong wind resources, and seeing that it gets most electricity from coal, I can’t feel too strongly about the increase in wind turbines there.

However, the lull during this latest record does again demonstrate that industrial wind turbine output has little capacity value, can’t displace firm generation, and is a low quality, low value, electricity generation source.

While the Times was busy trying to shame Steyer for the crime of changing his mind, real journalists at the Toronto Star were completing an investigation into the extent of the Koch holdings in the far north. Piecing together all the scattered data, they found that they control an astonishing 1.1 million acres of the tarsands, and that they are huge contributors to all the “thinktanks” and campaigns trying to build Keystone and other pipelines. And there’s nothing even remotely hypocritical about it –– it’s just disgusting.

END_OF_DOCUMENT_TOKEN_TO_BE_REPLACED

The Mowat Centre study may or may not have been terrible, but the timing of its release certainly was.

Yesterday, when Toronto’s Premier announced her new majority government is “reintroducing legislation that would, if passed, permanently prohibit burning coal solely to generate electricity in the province”, she wasn’t anywhere near Lambton, or Nanticoke- where people has lost their jobs over the closure of coal-fired generation.

An optimist might see the move as pointless political posturing, but it’s actually more damaging.

A wide-eyed Wynne had first made the promise to introduce such legislation in front of an idol, Al Gore, during the formative years of her minority government. Barely a senior at the time, Wynne’s infatuation may have served to endear her to the urban voters that returned her to power, with a strengthened mandate, months later.

Political pandering can be damaging in itself. Ontario doesn’t generate electricity with coal in the province anymore, largely because an all-party committee reached a consensus on the issue during the government of Ernie Eves in 2002. The Toronto Premier’s need to politicize the accomplishment is unhealthy in itself.

“Prohibiting burning coal solely to generate electricity in the province” is a stupid policy, built on ignorance.

Those two generating stations generated more electricity from coal in 2013 than Ontario generated since 2010.

Michigan’s Belle River and St. Clair locations likely put more CO2 into the earth’s atmosphere, in 2013, than all of the electricity generators in Ontario.

One of the reasons Toronto’s Premier announced that coal generation in Ontario would not only remain dead, but her government would be dancing on the corpse, was because The Environmental Commissioner of Ontario (The ECO) was delivering a report at the same time – one titled Looking for Leadership: The Costs of Climate Inaction. The ECO title his blog entry on the reports release “Ontario Failing in Fight Against Climate Change.”

The Toronto Star noted, in Ontario warned it will mess 2020 emissions targets, the Minister introducing the legislation “conceded… it is time to stop applauding the coal plant closures “and move on” “

Toronto’s Premier, and Minister Murray, held the photo op, using coal closures as a distraction from the government’s inaction on emissions reductions, in the middle of Toronto, with children as their audience.

A competent Premier of Ontario would have held an event near Lambton, in front of the children of displaced workers and the engineers and operators that had worked at two of the cleanest coal-fired generating units on the continent. 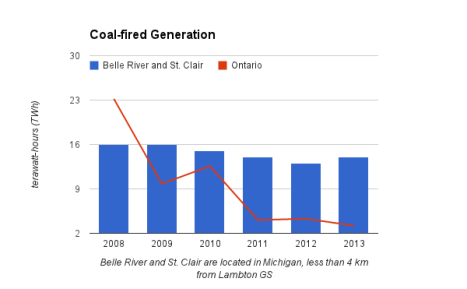 A leader could have differentiated her “ban coal” approach from the approach being introduced by President Obama to allow states to reduce emissions as they see fit.

A really good leader would have noted those US targets are still multiples greater than Ontario’s current emissions, and could have actually attempted to reduce global emissions by championing carbon pricing – or an honest emissions trading platform that might have Ontario benefit from the cleaner generation system once built by engineers and professionals.

A lousy leader would collect the next generation of citiots to indoctrinate with oversimplified propaganda.

As Toronto’s Premier did.

Parker Gallant’s latest, at Wind Concerns Ontario, is a splendidly acerbic take on an old topic/fraud.

If a pollster surveyed Toronto residents asking if they had ever seen a “wind turbine,” most of them would respond that they had—it’s at Exhibition Place. The 91-meter turbine on Toronto’s waterfront has become “iconic.” Built in 2002 by the WindShare Co-operative, with an initial capacity of 750 kilowatts (since reduced to 600 kilowatts), the little wind turbine has been the subject of many articles and news stories, and a handy backdrop for former Premier Dalton McGuinty’s “photo ops.” WindShare bills it as “Canada’s premier wind turbine.”

The turbine has played a role in university theses for students seeking degrees in environmental studies. Most made incorrect assumptions, probably based on the information they gathered from the co-operative that fostered the turbine. One such thesis, written by a University of Waterloo student, claimed the Exhibition Place turbine would produce “1,400 MW hours of energy per year (enough to power approximately 250 homes).” The truth is, those 250 homes would actually require 2,400 MWh annually (9.6 MWh X 250 homes = 2,400 MWh) not 1,400 MWh, and second to achieve that level of power generation, the turbine would have to operate at almost 46% of its maximum capacity—that’s well above the norm of 29-30% for turbines today. But claims like that were regularly produced by the proponents and seldom dispelled or even questioned.

Co-op Week also used the same figures of 1,400 MWh and the 250 homes, proving that not much effort went into understanding its capabilities…

My original content blog has a related post, from 2012, The Exhibition Turbine: An Icon for Ontario’s Mazza Race