TORONTO — Ontario ratepayers will benefit from $790 million in savings thanks to the Government of Ontario’s decision to cancel and wind down 758 renewable energy contracts, Minister of Energy, Northern Development and Mines Greg Rickford announced today…

All of the cancelled projects have not reached project development milestones. Terminating the projects at this early stage will maximize benefits for ratepayers.

Rickford also confirmed that the government intends to introduce a legislative amendment that, if passed, will protect hydro consumers from any costs incurred from the cancellation. Even after all costs are accounted for, ratepayers can expect to benefit from $790 million in savings from this one decision.

I thought a short post is in order as the incoming mainstream media reports are not informative or in any way helpful.

END_OF_DOCUMENT_TOKEN_TO_BE_REPLACED

The contract, according to the IESO’s contract list, was signed in June 2011 under the feed-in-tariff (FIT) program that paid $135/MWh, plus up to another $15/MWh as an “Aboriginal Price Adder.” While those contracts were expected to be operational 3-years after the project data, apparently this one is exceptional in ways other than costing $150/MWh (roughly 5 times what new 2019 wind in Alberta will cost).

Development of wind energy will help Ontario in meeting its goal of phasing out coal-fired power generation.

The windfarm is expected to displace 851,000t of carbon dioxide emissions a year, which is equivalent to the amount of carbon dioxide released by 200,000 cars. It will also offset 4,100t of sulphur dioxide, 1,200t of nitrogen oxide, and 13.4kg of Mercury emissions per year.

Unlike coal-fired power plants, the project will not use water leading to the conservation, which normally uses approximately two billion litres of water a year.

The project, of course, missed the coal era in Ontario’s electricity sector. The “goal of phasing out coal-fired power generation” is long since met. END_OF_DOCUMENT_TOKEN_TO_BE_REPLACED

Approval for wind turbines in Clearview Township has been revoked.

Although the article notes the proponent has 15 days to appeal, I’ve switched the status to “Cancelled” on my map of industrial turbines in Ontario.

The Environmental Review Tribunal’s action might prove contagious. It’s unclear why the IESO is not exercising contract clause’s to revoke other feed-in tariff (FIT) contracts. I reviewed FIT 1 contracts and found this:

Article 9
TERMINATION AND DEFAULT…
9.1 Events of Default by the Supplier
(j) The Commercial Operation Date has not occurred on or before the date which is 18 months after the Milestone Date for Commercial Operation, or otherwise as may be set out in Exhibit A.

So I checked my import of data from an IESO contract data listing (should match this). Aside from the Fairview site just cancelled, the off-shore contract persists despite a ban on offshore. The Amherst Island project has advanced to the stage of barge sinking in harbour – but not far beyond that, while White Pines was greatly reduced by the ERT yet ponders a future despite having run out the clock. 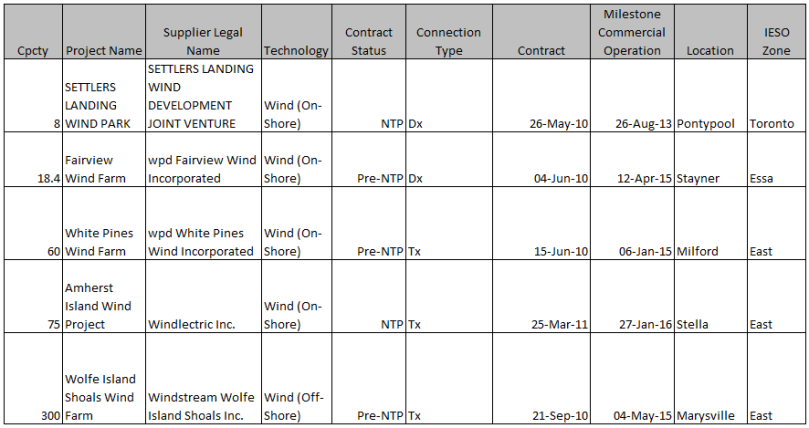 What’s in Exhibit A of these deals preventing the IESO from terminating?

If the wind project is paid $0.08/kWh (the average tariff for projects in the province’s first renewable RFP)…

The quote is from a 2005 document, Ontario Landowner’s Guide to Wind Energy, produced by the Ontario Sustainable Energy Association.

Comparing the cost of industrial wind turbines in Ontario by the procurement cited in the 2005 report, and the one run by the IESO in 2016, there has been little change in price.

In between these two procurements, over a decade apart, prices soared. There are no consumer benefits from the feed-in tariff mechanisms, introduced after the passage of the Green Energy Act.  Between the start of 2009 and the end of 2012 the government, through the Ontario Power Authority, contracted about 4,400 megawatts of industrial wind turbine capacity at rates around $135/MWh. The increase in rates above those shown in 2005, $40/MWh (4 cents/kWh), would add about $500 million a year to Ontario’s electricity costs for the 20-year terms of the contracts.

Ten billion dollars is not the full-term cost of the contracts, only the incremental cost of the feed-in tariff mechanism employed – and/or the rank political culture that employed it. END_OF_DOCUMENT_TOKEN_TO_BE_REPLACED

I started receiving messages last night on a sorta report by Environmental Defence (ED), and as I am still receiving them, I thought I’d write some thoughts – if only to simply copy a link when again asked for my thoughts.

Here is how ED’s Keith Brooks begins a blog post on their latest “work”:

Electricity prices in Ontario have risen in recent years, putting the squeeze on some Ontario residents and businesses. There are many reasons for the increase in electricity prices and renewable energy is one of them.  However, the role of renewables in diving up electricity bills has been vastly exaggerated.

I wrote on a poor 2014 ED work and noted their new backgrounder contains a graphic with the same information as Figure 1 of their 2014 work. Without acknowledging any level of competency in the compilation of data for either ED graphic, here’s the elements of residential electricity bills as they report them for 2016 and 2014:

Perhaps the “role of renewables in driving up electricity bills” is perceived as being significant because:

END_OF_DOCUMENT_TOKEN_TO_BE_REPLACED

Ladies and gentlemen, we are gathered here today to pay our respects to Ontario’s utility-scale wind industry, which has passed away from unnatural causes (a lack of government support).
Those of you knew who knew Ontario will recall it was a place of great passion for renewable energy. In just a short time, Ontario grew to become Canada’s leading wind province. And with the passage of its Green Energy and Green Economy Act of 2009 – which introduced North America’s first feed-in tariff – the province became a leader on the global stage. Those were good times. Soon after the act’s unveiling, global energy players, such as Samsung Renewable Energy and turbine manufacturer REpower Systems (now Senvion), as well as U.S. developers, such as Invenergy and Pattern Energy Group, set up shop north of the border. And Ontario was also an early pioneer of climate change. In 2014, the place rid itself of coal-fired generation.

You could continue reading at the wind site, but at this point let me remind you the industry did remarkably well considering it was born with neither a brain nor a heart.

It’s survivors seem to be similarly lacking in intelligence and empathy.
END_OF_DOCUMENT_TOKEN_TO_BE_REPLACED

The Ontario PC party put out some tweets that tweeked my interest yesterday, on payments due to a court ruling.

"This $95 million court case isn’t new to this government. The OEFC and Northland have been battling it out in court for years" @brownbarrie

After watching an exchange between Premier Kathleen Wynne and Leader of the Official Opposition Brown, I decided to see what they were on about.

It turns out I knew most of what they were on about, it was just hard to be certain as neither of them did.

Two new pieces of information since I wrote on the court case in May:

The Ontario PC party seems totally unaware what the nature of the case is, and it seems blissfully oblivious to the fact the latest $94.7 million payout was not the first payment, nor will it be the last if the court case fails – and Northland is only one supplier getting the payouts as a result of the court case against the Ontario Electricity Financial Corporation (OEFC).

The exchange in the legislature doesn’t reveal:

END_OF_DOCUMENT_TOKEN_TO_BE_REPLACED

This is a post written by Bruce Sharp. An earlier version appeared on Linkedin.

Did a single by-election loss cause this awakening?
In this day of politicians seemingly and completely incapable of climbing down from heavily entrenched positions, this seems to represent at least some progress – admitting there’s a problem.

Upon hearing this news, my mind went to what the government would do to provide relief – the depth, breadth and source of funds. Since 2003, we’ve had a number of dubious band-aid solutions, including a retroactive price freeze, the Ontario Clean Energy Benefit, an end to the Debt Retirement Charge (for residential consumers) and the Ontario Electricity Support Payment.
What would be next?
We now know it’ll be a removal of the 8% provincial sales tax — for those who vote and perhaps small business. Estimates have put the cost at $ 1 billion per year – suggestive of a base of $ 12.5 billion per year. That looks to me something like 70 TWh at 18 cents/kWh or perhaps slightly more energy at a slightly lesser rate. The Regulated Price Plan is about 58 TWh per year and excludes those on retail contracts, so perhaps the threshold will be 250,000 kWh per year.
The inappropriateness of this new measure should be obvious to anyone with even a modicum of energy policy instinct and yet the policy will have appeal for some. For all but the latter group, one has to wonder: does the government think we’re all stupid?
Some of the reactions have been bang-on, including Ontario Regional Chief Isadore Day’s reference to the move as a “shell game” and a Globe and Mail editorial referring to the move and electricity file as a “total mess”.

END_OF_DOCUMENT_TOKEN_TO_BE_REPLACED

Ontario’s IESO, nominally responsible for the operation of Ontario’s electricity system, reported for the 3rd quarter of 2015 there were 2,006.2 MW (megawatts) of contracted “Solar” capacity in commercial operation.

The American Energy Information Administration (EIA) reports that, as of November 2015:

Ontario’s solar is contracted much differently than American solar. While the majority of American supply is shown by the EIA as “utility-scale capacity”, the IESO’s 2015-Q3 report showed only 12% (240MW) as “connected directly to the IESO-administered transmission grid (Tx).”

Very few Ontario residents would know about the comparatively large amount of solar in the province because the IESO’s poor reporting is amplified by the province’s media. The IESO reported only 0.25 TWh (million megawatt-hours) from solar in summarizing 2015’s generation, which ignored the 88% of contracted supply not connected to the transmission grid they administer – but which they did contract. The Toronto Star amplified the information as an error, beginning a “Q & A for Ontario’s hydro system” by misinforming readers that the “less than 1 per cent” (sic) referenced the share of Ontario’s electricity.

I’m spoiling the ending by quoting it – and adding a graphic.

The government’s decision to reign in the solar scammers appears to indicate some level of recognition of the drastic impact on consumers of adding junk generation costing at wholesale multiples above the cost of delivered commodity power.

From the beginning, the purpose of the FIT program was to use electricity ratepayer dollars to buy constituencies supportive of the Liberal government’s agenda. Recent FIT program changes indicate that the Liberals have shifted their friend-buying intentions away from solar interests to new constituencies. These include various conservation authorities who are candidates for a lot of the small hydro development opportunities left in Ontario like this and municipalities that can host landfill gas generators. The saving grace for consumers about small hydro and landfill gas is that the damage of the outrageous FIT prices is limited to a few hundred potential MW.

When the time comes to clean up Ontario’s electricity mess, one useful step will be the cancellation of FIT contracts held by government entities. Hospitals, schools, police stations, conservation authorities, public arenas and other government operations have no business being in the power generation business. Their duties to serve the public interest, whether to heal the sick, educate the young, enforce the law, protect low lying properties from flooding, or provide sporting opportunities do not include a mandate to promote harm to energy consumers.

Colder Air
Create a free website or blog at WordPress.com.