I’m often asked about claims from the Ontario Clean Air Alliance, and I usually don’t prioritize acknowledging them publicly.

Privately I have, and because the topic continues to come up, I thought I’ll post based on a quick e-mail I produced regarding this OCAA graphic – which is from a more comprehensive document where they reference the sources of most of the figures: 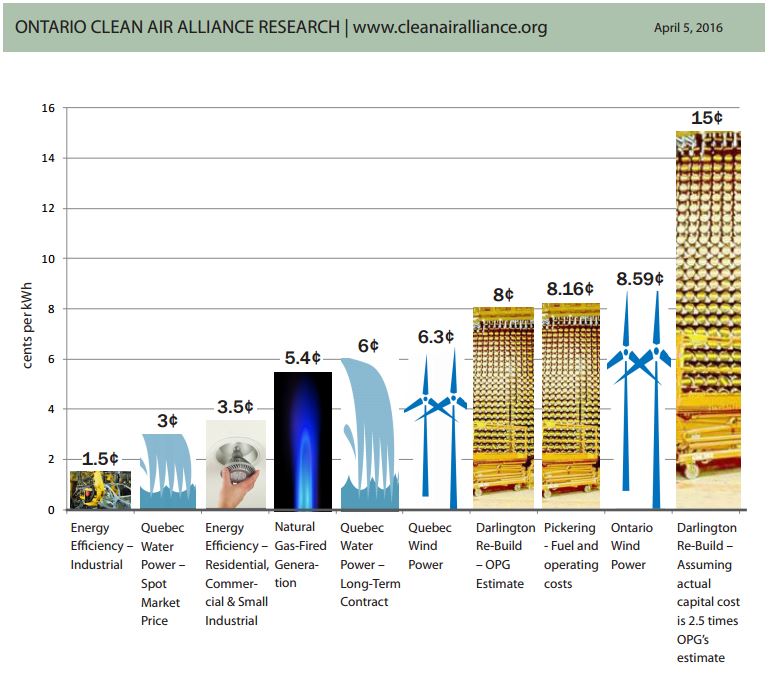 Energy Efficiency-Industrial at 1.5 cents/kWh
-This is surprising, because you’d think industry wasn’t so stupid that they’d be paying 5 times that amount for power instead of just saving without any government programs at all.

But the head of conservation at the IESO says so – so I guess that counts as credible in some places.

Or… perhaps the IESO has a program to appease a Premier who made conservation first a mantra before even looking at the electricity portfolio.

I’ve looked.
The government re-branded Class A global adjustment mechanism the Industrial Conservation Initiative (ICI). The ICI policy costs non-ICI consumers $500,000 for 1 megawatt of supply – not planned in the future, but actually calculated from real data- and that was before a judge added half a billion to consumers’ bills by calling the ICI an industrial subsidy.

At times $500/kWh plus legal penalties – tomorrow a cent and a half.
I’m skeptical.

I admire how diabolical the use of this is.
If you look up the referenced document ( Commission sur les enjeux energetiques du Quebec,Maitriser Notre Avenir Energetique, (2 fevrier 2014 ), and use google translate (if you’re a unilingual blogger), you find this price was calculated as what exports are worth outside of peak hours (when exports are profitable) – the calculation was done as a benchmark of what price wind would have to cost to be worth contracting (because Hydro Quebec is already generally exporting all they can at peak, and there’s no guarantee it will be windy at peak anyway)
Seriously – this is a price for Quebec imports (for a past time period) if you strip out hours the importing would be necessary.

Another theoretical price that implies all of us spending 20 cents/kWh are doing so solely out of ignorance.
The reference for this claim is to an Ontario Power Authority (OPA) presentation: note the comments above on industrial energy efficiency: these are statistics for placating a Premier.
They didn’t – the OPA is now toast… but you could always try to pin down Terry Young at the IESO of this figure (heh heh heh).
I will note I argued with the previous Environmental Commissioner on the value even at 3-4 cents. Unless the “conservation” is taking a generator out of service (which I’ve never seen), as long as Ontario is paying net revenue requirements so that natural gas generators stand ready, the value of most conservation is the value of the fuel avoided – which has been under 3 cents/kWh for quite some time.

the OCAA says this about 5.4 cents/kWh:

“assuming the gas plants have a 95% annual capacity utilization rate and the commodity cost of gas is $5.50/MMBtu”

The IESO currently shows 9,942 MW of gas/oil capacity installed in the province. At a 95% annual capacity utilization that is 82.7 TWh of production – so assuming a 5-fold increase in emissions too.

Ontario pays natural gas plants to be available (for capacity). The specifics of “net revenue requirement” contracts aren’t generally known, but here’s a chart I put together for a post in 2012 based on some information on the Oakville Generating Station.

I’d point out that the actual capacity factor is not even 20%, which explains the rates in the OEB RPP documents I noted as a neutral source of rate information.
How many emissions running 10,000 megawatts at 95% capacity factors?
Quebec Water Power – Long-Term Contract 6 cents/kWh

The actual frick’n justifications the OCAA gives for this is it’s between their silly 3 cent spot price and OPG’s estimate cost of refurbishing Darlington (huh?), and/or it’s the price of a small (250 MW) contract for exports to Vermont if you make all sorts of assumptions on market rates there – which the contract pricing is tied to.
What I wanted to say about replacing Darlington with Quebec imports I said in Ontario’s electricity future isn’t this Quebec Diversion – which I feel was supported in the IESO/OPA report that followed later.
Quebec Wind Power 6.3 cents/kWh

I expect that’s true, but this figure is twice what the report they take the 3 cent/kWh figure from suggested wind is worth in Quebec.
The province does have both good wind resources and storage reservoirs, so I’d suggest it’s a better value there than in Ontario – without endorsing it anywhere.

I don’t doubt these are the numbers from OPG (re: Darlington) and the OEB (re:Pickering) – and OPG’s current rate request does make them look implausible (putting it nicely)
Ontario wind power 8.59 cents/kWh

This is from the recent Large Renewable Procurement. Again there’s a difference in value between sources – and even pricing is difficult because curtailment is soaring. The LRP contract includes some unpaid curtailment, but basically assumes 2014 levels – curtailments doubled that in 2015 and by my tracking are trebling in 2016. Some hand wavy calculations I won’t do, but what’s driving the overall curtailment percentages is local surplus’ where new turbines are built near old.
I wrote on curtailment here – with a quick recent post here – and one specifically on LRP contracts here.

One unit is to be completely done before others are started. Unless you want to argue it’s cheap at 15 cents, I’d just note it’s an assumption that’s unlikely to be realized because if it ‘s correct on the first refurbishment, other units won’t be refurbished.
Beyond that.. Bruce refurbishments of units 1 and 2 were over budget (not 2.5 times), yet rates ended similar to expectations (due to a low-interest world I guess), and…
There was learning between Pickering 1 and 4 refurbs – so even if the first refurb is high, if it’s in the ballpark it’s likely an indicator future ones would improve.