Environmental Defence issued what they consider a study, and it was treated as news (Globe, Star).

It shouldn’t have been.

Your Home Electricity Bill: A Study on the Costs in Ontario includes some pedestrian costing estimation by a consultant, and regurgitates the spin from past reports that we had felt slain multiple times. 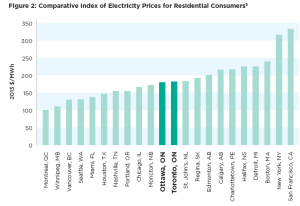 The report also cites a Hydro Quebec study to demonstrate how Toronto and Ottawa, collectively known as Ontario (prices are actually higher in the rest of Ontario than these cities).   One problem is the HQ data being graphed is in base units, with Montreal set to 100, as the base:  Montreal’s $68.66/month (1000kWh residential demand) is the index, making Toronto’s $124.75 182 on the index (because it’s 82% higher).

A higher share of cost than generation means the supply is more expensive – obviously.

Less obviously, because solar and wind in Ontario have little capacity value (expectation of being producing when required), they serve only to make firm generation (usually natural gas) more expensive.  Put in terms of the $77 shown for supply on the catchy graphic in ED’s report, fossil fuels would still account for around 17% of total cost if wind and solar equalled 0%.

That’s only one reason people, sentient ones, claim costs rise with renewable supply.  As my more thorough estimates indicate, there’s also a cost to Ontario residential consumers of selling electricity to export markets, and large industrial customers, at prices far below the full cost of that supply.  Intermittency is a contributing factor to that behaviour.

Another E.D. shortcoming is claiming the cost of purchasing the supply is the full cost of adding the supply – whereas some expenses are incurred to add the supply in additional transmission and distribution infrastructure.

ED’s report later disposes of any pretense of numeracy and goes into the safe confines of misdirection with 2003’s blackout, and attributing today’s much cleaner air to the amount of renewable energy they just claimed was negligible in arguing it wasn’t spiking bill prices.

It gets stupider again in starting a paragraph, “As to what energy should replace polluting coal…”

The rest of the report is either scenarios based on the OPA’s scenarios (which few have much faith in), and/or  typical E.D. bullshit referencing the same tired old anti-nuke kook nonsense they always do

The zombies referenced by ED, and rebuttals: